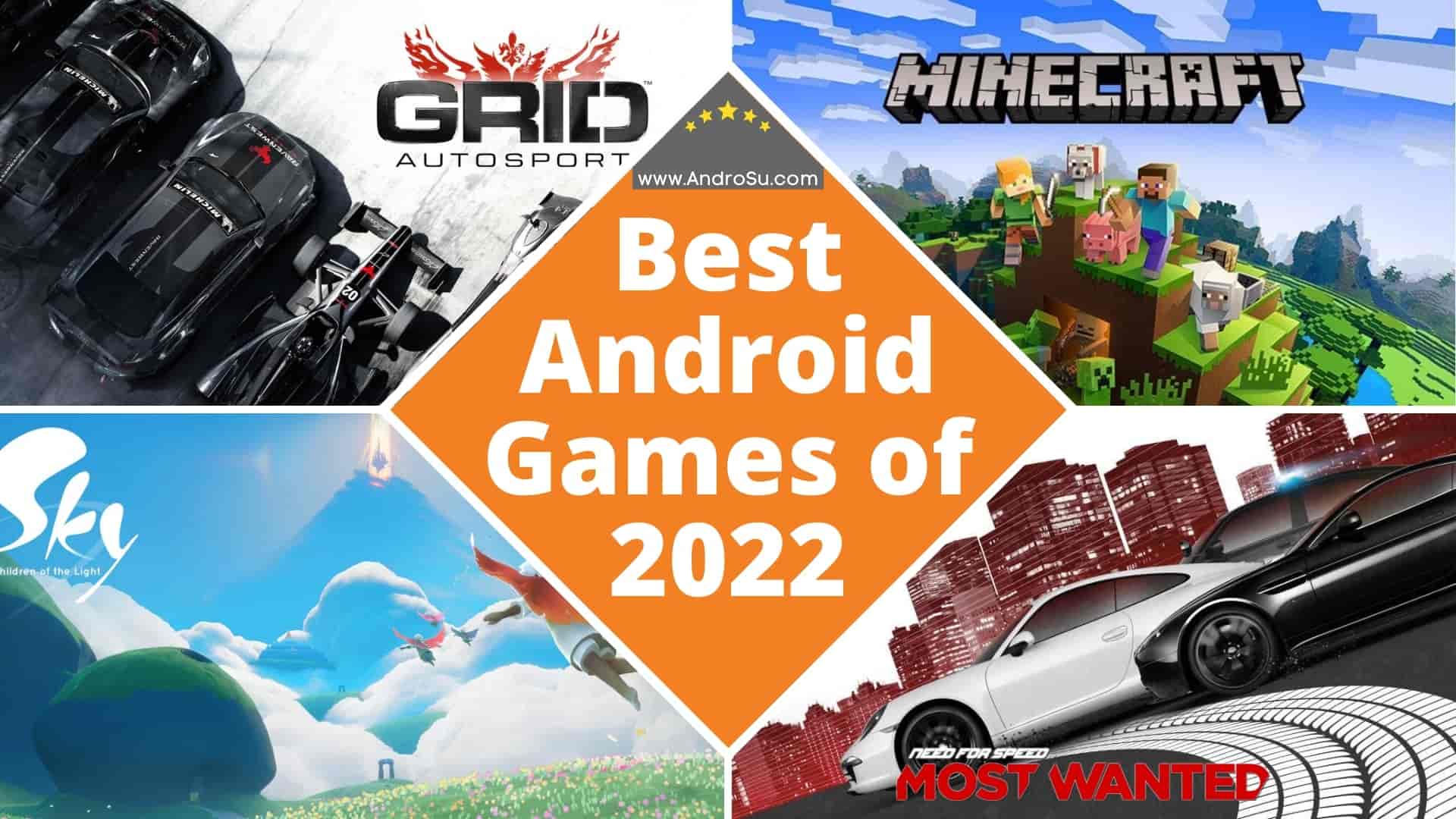 There is no shortage of games on the Google Play Store. If you have opened up the Play Store, you would have noticed that Google Play Store has a dedicated section for games. The demand for games has been steadily rising over the years, with many AAA Titles slowly making their way onto the mobile platform.

It was only recently that AAA Game Developers started taking the mobile market seriously & made games that featured amazing graphics and gameplay.

With Android devices becoming a lot more powerful with much better graphics cards & specs, the minimum requirements for most mobile games can be met with even medium-range Android devices. Most, if not all, of the games on this list, will work on all mid-range devices. Budget range devices might suffer a bit in terms of performance or may not support the game due to storage or graphics requirements.

In this blog, we will be looking at a few of the best action games for Android in 2022.

The Best Action Games For Android in 2022

No Top Action Games for Android list in 2018 onwards is ever complete without Player Unknown’s Battle Ground (PUBG) making its way into the list. This game was probably one of the most popular Android games when it was released.

While PUBG gained global popularity, it struggled to compete in the United States; as Epic Games’ major hit, Fortnite overshadowed it. When it launched on iOS and Android in 2018, PUBG Mobile managed to overtake Fortnite in the total number of downloads through its large user base in China and India.

For those unaware, PUBG falls under the Battle Royale genre, which has become a lot more popular these days, with PUBG being a major reason. The original PUBG game helped launch the battle royale hype and quickly made its way to mobile devices in the form of PUBG Mobile. The game’s sequel, PUBG New State, is here to advance PUBG and bring players new content to sift through.

The game begins with 100 players dropped onto some island and given the responsibility of surviving. The most significant change that PUBG: New State brings is the setting, which now takes place in 2051 on a map known as Troi. Despite its new name and future setting, Troi looks and feels like any other battle royale map, with various abandoned structures, wooded regions, and other things to discover.

While the map itself may not appear to be completely fresh & new, the elements found in the world are. The same types of automobiles and vehicles seen in PUBG Mobile may be found on the map, with a more futuristic skin. The Volta and the Vulture are two new vehicles in the game. The Volta is a brand-new vehicle, while the Vulture is a two-wheeler that functions similarly to the bikes in the PUBG PC versions.

Free Fire is the ultimate survival shooter game available on mobile. This battle royale game for Android first made its way to Play Store in 2017. Each 10-minute game places you on a remote island where you fight against 49 other players, all seeking survival. The players freely choose their starting point with their parachutes and aim to stay in the safe zone for as long as possible.

This is typical for battle royale games, and if you played PUBG, you would be quite familiar with this game’s gameplay. Garena Free Fire also allows you to drive vehicles to explore the large map, hide in the wild, or become invisible by probing/sneaking under grass or rifts. Ambush, snipe, survive; there is only one goal: to survive and answer the call of duty.

Garena Free Fire for Android allows you to create squads of up to 4 players with voice chat enabled to communicate and work together to conquer opposition teams & return victorious. Answer the call of duty, lead your friends to victory and be the last team standing to win!

Yet another PvP, Battle Royale-styled game. For those unaware, Call of Duty: Mobile is a free-to-play shooting game developed by Timi Studio Group and published by Activision for Android and iOS. It was released on October 1st, 2019, and was one of the most significant mobile game launches in history, generating over $480 million in revenue with 270 million downloads within a year.

It is no surprise that Call of Duty’s launch was this huge as Call of Duty is probably one of the largest titles for PC and/or Console gaming.

In Call of Duty Mobile Season 1, players can choose to play ranked or non-ranked matches in multiplayer mode. The game has two types of in-game currencies: “Credits,” which are earned through playing the game, and “COD Points,” which have to be bought with real cash (in-app purchase). That being said, Call of Duty is not a game that is ‘pay to win. The game is completely playable without spending a dime in IAP, although some exclusive characters and weapon skins can only be purchased with COD Points.

The multiplayer mode is a standard first-person shooter using old levels, comparable to the previous Call of Duty games on other platforms. Team Deathmatch, Domination, Free for All, Hardpoint, Kill Confirmed, and other game modes are among the most popular gaming modes in Call of Duty. COD Mobile also features “Scorestreaks,” which are special weapons that become accessible as the player reaches certain times and points in the game. There are also special and limited multiplayer modes that might span days, weeks, or even an entire game season.

Like the previous Batlle Royale Games for Android mentioned above, Call of Duty also features a Battle Royale Mode, which features up to 100 players. A player can choose to play alone, as part of a two-person team, or as a four-person squad. At the start of a game, each player selects an ability ranging from healing to building a launchpad. When all 100 people are ready, they board a plane that will fly in a straight line across the map. PUBG Players will be familiar with this starting as it is pretty similar. Every game, the flight path changes to prevent players from learning the exact spawn locations.

Additionally, every team is assigned a jump leader who determines when and where the team will land. At the start of the game, each player has only a knife and has to search for loot as soon as they land to get better weapons. The map contains weapons, vehicles, and items that players can find and use to increase their chances of killing enemies while remaining alive.

High-tier loot zones are marked in yellow on the map and provide better items to players. These zones are also the ‘hottest’ as all teams try going for this high-tier loot. The safe zone on the map shrinks as the game progresses, with players who stay outside the zone for too long being killed. If a player or team is the last one standing, they win the game.

Shadow Fight Arena Ninja PvP is Nekki’s latest game release. The game launched in November 2020 and won the DevGamm’ Best Mobile Game’ award the same year. This award-winning game has over 10 million installs on the Google Play Store with an average rating of 4.5 stars.

Shadow Fight is a free-to-play, 3D online fighting game. The game allows you to compete in 2 player PVP combats brawls for fun with friends, or play offline against smart bots. The game features amazing graphics with realistic animations and physics. The animations are so smooth that it almost seems real as you battle foe after foe. Shadow Fight Arena’s control scheme consists of a directional stick on the left and buttons for punching and kicking on the right.

However, the combinations of attack directions and types give you different move sets. Learning the moves is critical, especially if you are going against more challenging opponents. Though you can get away with smashing all the buttons early in the game, your technique and strategy matter more and will help you defeat tougher opponents later.

Shadow Fight Arena allows you to make a team of 3 heroes and battle in online multiplayer mode against real people. You score a victory in a fight only if you can defeat all of the opponent’s heroes in an epic battle. If you are tired of online mode or have a slow internet connection, you can fight offline against advanced, machine-learning bots! If you are tired of the monotony of Mortal Kombat or Injustice, then this game is for you! Build your team of the best warriors, samurai, and ninjas! Collect and upgrade all the heroes — Each one has unique abilities to change and adjust to your style.

Many people have wanted to play PvP games on mobile ever since Shadow Fight 2 came out. Arena made that dream come true. This is an action game for everyone. If you are feeling up to it, you can brawl for rating, and when you need a break, you can play offline and fight for fun. It will make you feel like an epic ninja. Furthermore, it is free to download and play!

Mini Militia – Doodle Army 2 is about intense, online multiplayer combat! According to the Google Play Store, the game has over 100 Million downloads. What is great about Mini Militia 2 is that the game has over 20 maps to explore with a wide range of modern and futuristic weapon types. If you ever get tired of playing online, you can take a step back and play around in offline mode to master the game. The game has joystick controls on the left and fire controls on the right.

Mini Militia – Doodle Army 2 does not feature as intense graphics as other games on this list. Instead, the game is themed around the ‘doodle’ concept. The animations and motions are not as cool as Shadow Fighter Arenas. This downside is remedied by its small size and the fact that it works on most android versions and devices.

This game is not as intensive as other games on this list, but it is still fun to play, especially if your device is not as modern and cannot handle other more intense games.